Kind words from our customers

Our company and products have always been a reflection of our great team of employees. Throughout the coronavirus pandemic our team, many of whom are pictured here, has been incredibly thoughtful about preventing the spread of the virus. The new realities have changed how we operate, but not the care and consideration we hold for each other, our customers, and the products we take so much pride in creating. During this challenging time we have been inspired by the incredible support of our customers.

The Joinery’s showrooms are currently open by appointment only.

During the ongoing protests of police brutality against African Americans and the killing of George Floyd, The Joinery’s downtown Portland showroom was vandalized and looted. While this was unfortunate, The Joinery supports the millions of peaceful protesters across the country and around the world who are speaking out against the ongoing injustices faced by African Americans and other people of color. We are encouraged by the strength of the response and look forward to helping build a society where there is truly justice for all. To read a letter from our CEO click here. 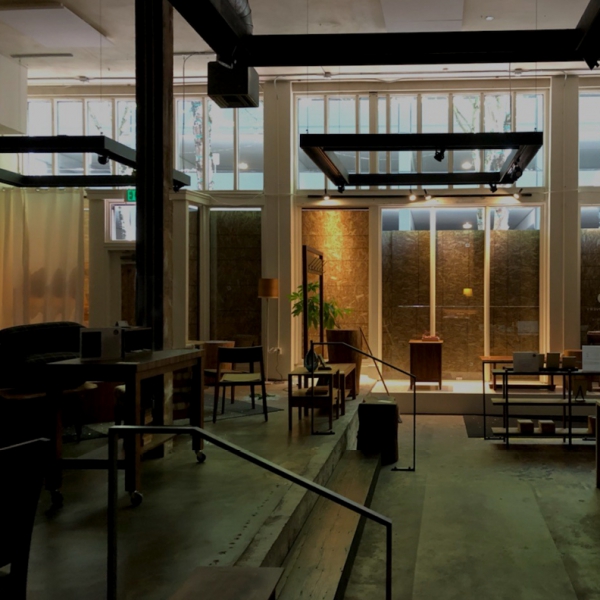 Letter from Jon: The Tip of the Iceberg

Like many people around the world, I have struggled deeply since watching the murder of George Floyd. On this issue, there can be no “statement from The Joinery.” This is too personal for that.

For me, there are several layers to this latest outrage. The outermost layer is the most obvious: A handcuffed, defenseless black man was brutally murdered in broad daylight on a public street, once again at the hands of a white police officer.

That in and of itself was horrific. But as we all know, this was not an isolated incident. We have seen video footage of the deaths of countless of black people over the last several years at the hands of white police officers. And as we all know, these killings did not start with the advent of cell phone video technology. They have been taking place for 400 years.  Advances in technology have simply brought it more to light, undeniably, in all its brutality.

And even as the videos continue to mount, we know that what we see on TV is only a tiny fraction of what is really happening. This behavior – and its deadly results for black Americans – is far more widespread.

Getting to the core – and what shakes me the most – is the underlying beliefs that white Americans have about blacks that lead us to the point where a police officer could murder a defenseless black man in broad daylight with complete impunity. His fellow officers did nothing as he knelt on George Floyd’s throat for 8 minutes and 46 seconds. The passersby taking cell phone video and imploring the officer to stop did not give him pause. How could someone act with such heartlessness, with such disregard for human life, with such confidence that he would face no repercussions?

Yes, we know that police brutality against African Americans is widespread and deadly. But this problem did not start with attitudes of white police officers. These beliefs have permeated deeply into white subconsciousness and are pervasive throughout our country in all aspects of society. We watch these murders with horror. But they are the tip of the iceberg. They are the most visible, undeniable and obviously reprehensible actions. But like an iceberg, much more lies below the surface. The overwhelming mountain of injustices that black Americans face on a daily basis are still largely unseen and unacknowledged by white people. While most of these injustices are far less serious than murder, their cumulative impact is no less deadly; their psychological toll no less severe.

On a very personal level, I see how my African American wife bears the scars that are inflicted on her on a daily basis, and how witnessing each new killing on TV weighs her down. How she reacts when she sees a pickup truck with a confederate flag. How she won’t keep the second-floor windows open on summer nights when it’s 80 degrees in the house.

And I worry about my beautiful brown-skinned children, particularly my son. How can I help him overcome the institutional bias that is stacked against him? What steps must I take to protect him from white people? How can I help keep him safe when he encounters police? When he goes for a jog in the neighborhood? When he goes to a park to look at some birds?

– Jon Blumenauer, owner of The Joinery 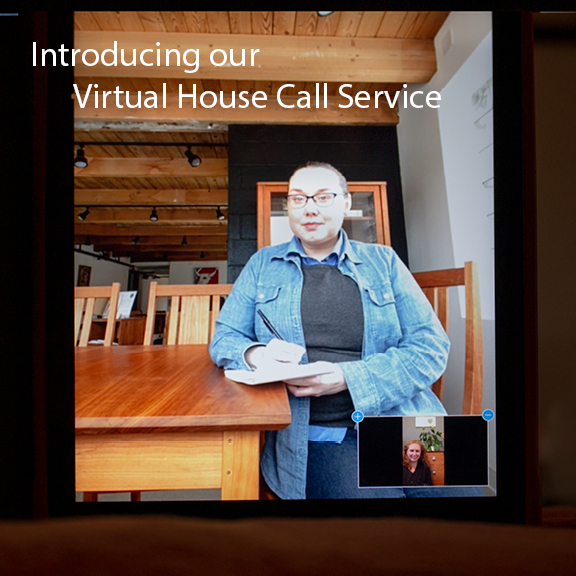 Let’s face it: during the pandemic, lots of folks are spending more time at home, less time in stores, and perhaps even doing a bit of online shopping. To help customers we are excited to launch our Virtual House Call service. Our Sales and Design teams can answer any questions and work with you on all aspects of design and product selection process to help you find the perfect piece for your home, including designing it from scratch.

Our Downtown showroom is open

We continue to take thoughtful steps to serve customer needs during the pandemic. To optimize the safety of our customers and staff, we reopened our Downtown Portland showroom with enhanced safety measures.

Using the Oregon Health Authority guidelines as a starting point, we augmented with additional standards. We are capping the occupancy at 5 people. With about 4000 square feet of public space and high ceilings, our showroom offers ample space for physical distancing. We are also asking that all visitors wear a mask while in the store and will provide disposable masks for anyone who does not have one. 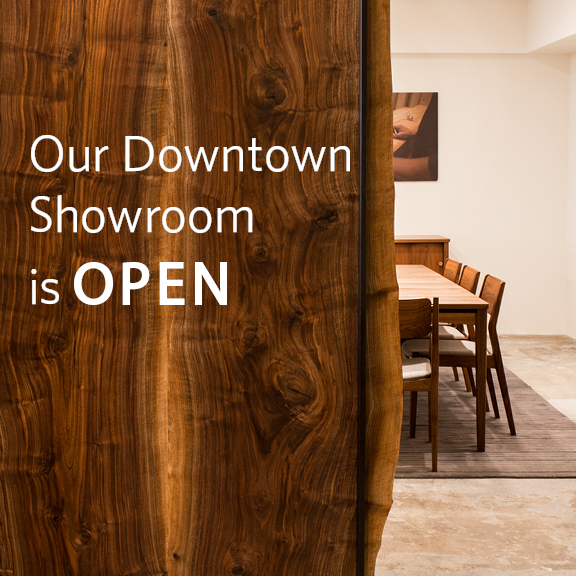 Currently our showroom hours are Monday-Sunday, 11:00-5:00. Our woodshop will remain closed to the public at this time.

Getting the band back together

After closing our operations for over a month to prevent the spread of COVID-19, we are taking our first steps toward reopening. We began with a small group of 4 craftspeople coming back under enhanced safety procedures. This is a balancing act between protecting the health of our workers and broader community, restoring the livelihoods of our team, and fulfilling obligations to our customers. We will gradually add to the team as we can do so safely. We will continue to keep customers updated on the progress of their orders and appreciate your understanding during this time.

If you’re like most people, you are probably spending a lot more time at home these days – perhaps even doing a little more online shopping. While our showrooms remain closed due to the coronavirus pandemic, they are both well-stocked with furniture available immediately. To help make for an easy virtual shopping experience, we have created this online catalog of our in-stock pieces.

For folks who would like to see pieces in person, we can open our showrooms by appointment. Every purchase made during this time plays a critical role in bringing our team of skilled craftspeople back to work, and we thank you very much for your support.

If you are interested in a piece shown here please contact us as soon as possible and we can let you know the current availability. We will do our best to update the catalog as items sell.

Update from The Joinery 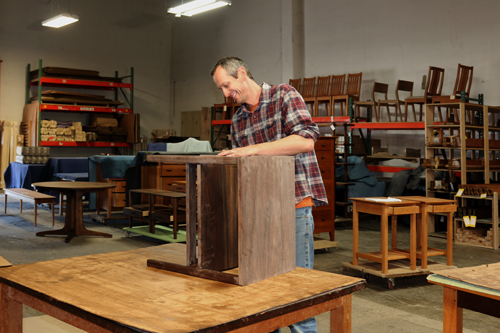 Our Shop Foreman, Kelly, is famous at The Joinery for his saying “Finishing is only the beginning.”

This statement is particularly appropriate now as we plan how to safely return to work after shutting our operation down due to safety concerns with the coronavirus. We have taken physical distancing requirements to the extreme with Kelly working alone in our Shop over the last month since we shut down.

Letter from The Joinery

On Friday 3/20, I made the difficult decision to close our operations temporarily as we deal with the coronavirus outbreak. This followed on the heels of the closure of our showrooms and layoffs in our sales team early last week. With events rapidly evolving, I watched with increasing concern about the highly contagious nature of the virus and the potential it has to overwhelm our healthcare system here as it has in other parts of the country and the world. Given this, I simply could not ask our team to continue to report to work, even with the increased safety measures that we have implemented. It puts our employees, their families, and the broader community at too great a risk.

This was a heart-wrenching decision for me. Along with the showroom closure and sales team layoffs, the shutdown of our Shop and office mean that over 80% of our team are no longer with us, at least for now. While ceasing operations reduces the risk of transmission, it places a tremendous financial toll on our employees now when they need financial security more than ever. My hope is that this measure will be helpful as part of a wider sacrifice we are all making to control the spread of this deadly virus. And that as a result, the danger will pass and we will be able to bring our team back more quickly.

We are operating with a small team during this transition and will do our best to communicate and respond to questions. I ask for your understanding and forgiveness if that response — or your furniture order — is delayed. For those of you who have orders in process with us, your forgiveness of the delays resulting from our shutdown are a critical part of us getting our team of skilled craftspeople back to work and restoring their livelihoods as soon as it is safe.

We will be communicating regularly along the way to keep you informed of our progress.

Every year we enjoy getting to refresh our website with new photography of our furniture designs styled in different spaces. This year we are excited to be able to use our new showroom for the shoot. Working with local photographer, Jon Jensen, The Joinery team was able to create a few bedrooms and dining room vignettes using classic Joinery designs alongside some new designs. These settings came together with wonderful bedding from French Quarter Linens, carpets from Tufenkian, and beautiful artwork by Monika Kralicek. 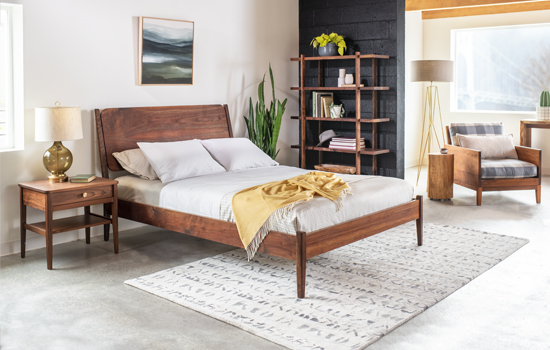 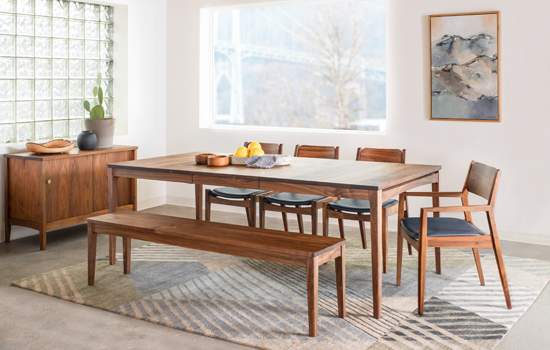 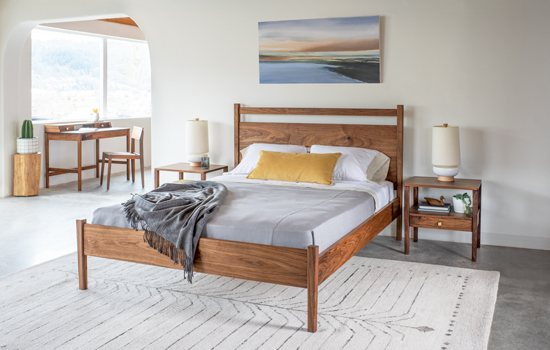 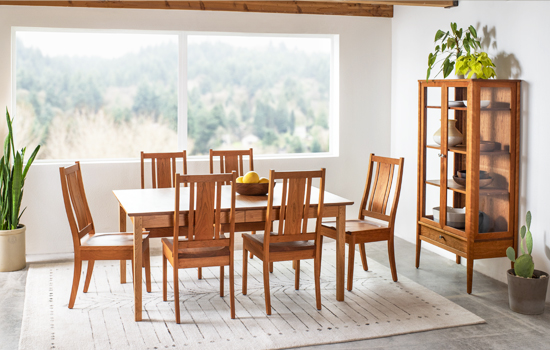