Argyle connects with its past

For Argyle Winery, the project of expanding its tasting room and hospitality facility had a focus on blending the past with the present.

While that intent included retaining the “feel” of the production facility that formerly stood on the Dundee campus, it also extended into a very literal sense of utilizing the same building materials from the old structures, which were carefully deconstructed by crews over the past eight months.

One of the large buildings, home to the crush pad equipment, was built in 2008 and therefore was still in great condition when the project began. With the new plans for the site, though, it wasn’t needed as an indoor space.

“It would have been criminal to tear it down,” Argyle director of sales and marketing Chris Cullina said. 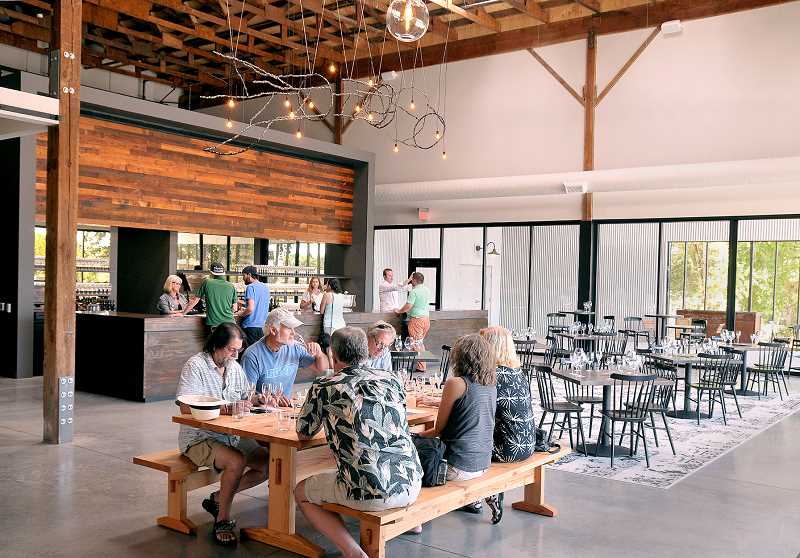 The Joinery built a custom fir table and benches (shown above) from the lumber salvaged from the project.

So the building was partially deconstructed, with the sheet metal from the walls later to be reused in the new construction. And the recycling didn’t stop there.

That and especially the older buildings, Cullina explained, “turned out to be pretty generous.” Not only were the materials plentiful, but they had retained an impressive level of quality.

For example, housed within the building that hosts the spacious new tasting room is the wine library, holding bottles from each vintage since the winery began production three decades ago. In the small room a centerpiece table shows off just how well-preserved the wood was from the old buildings.

“We found absolutely pristine Douglas fir that was hermetically sealed in the ceiling in our bottling room,” Cullina said.

When it was sent to The Joinery in Portland to be crafted into a table for the wine library, Argyle received a call that the wood was still too wet to work on and had to be sent back to the kiln a second time — despite being installed in the building 60 years earlier. It had been sealed so well between pieces of plywood, it was virtually untouched by the elements.

Turning up materials of that quality had a role in shaping the rest of the project.