Shoppers typically make purchasing decisions based on the quality of a brand’s product and its price. But a third factor – a brand’s “purpose” – has emerged as equally influential. Roughly 84 percent of consumers say they try to consider a company’s social and environmental pledges before they buy or shop, according to a 2015 Cone Communications Study. 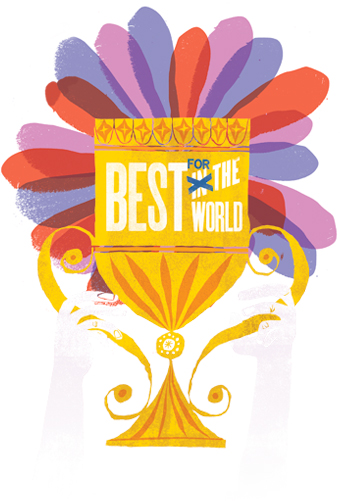 “Consumers are more educated about the marketplace,” says Kate Zabriskie, consultant and founder of Business Training Works, Inc. “And the brands they choose are often a reflection of who they are, and they vote with their wallets. Businesses are recognizing this.”

That’s why many businesses have adopted B Corp states – a designation that holds them accountable to standards beyond just profit. Be wedding conscience to corporate, B Corps are required to re-cast their mission statements and corporate goals from being “best in the world” to “best for the world.”

“Companies that certify as B Corps have a mission to describe what their public benefit is,” says Katie Holcomb, the communications director for B Lab, the organizing body for B Corp. “And that can be embedded in their articles of incorporation or in a deeper way.”

Currently more than 1,500 businesses have certified, and an additional 30,000 have tested the waters by taking the B Impact Assessment test.

The B Corp idea was hatched in 2007 by a trip of entrepreneurs who saw many owners using their businesses to make a positive impact in the world – alleviating hunger, reducing poverty, protecting the environment, and so on. To formalize this movement, they launched B Lab, created a certification, and set benchmarks against which these companies could measure their efforts.

Twenty years ago Tim Frick decided he wanted to make a difference. Dissatisfied by what he saw at his corporate job – poor treatment of employees and corporate decisions that had negative impact on the environment – he decided to quit and open Mightybytes, a digital creative shop.

“I wanted to find a better way to do business, to be part of the solution rather than the problem,” he says. “I wanted to work toward building a more sustainable future for people and planet but also be profitable.”

Jon Blumenauer, CEO of The Joinery, a furniture manufacturer, displays its B Corp badge on its website and posts its job openings to the B Corp job board.

“One of the biggest surprises about our B Corp status is how effective it is as a recruiting tool,” he says. “We have done a lot of hiring over the past year, and candidates tell us they’re drawn to us because we are a B Corp. This has provided us with better candidates and made our hiring process more effective and efficient. The end result is that we have a stronger team.”

How can a business begin to think about moving towards being more mission-driven? For starters, they can go online and do the short version of the B Impact Assessment test, and get ideas of ways they can make a difference. Many companies looking to dip their toes into adopting a larger purpose often start by choosing a cause or by enabling employees to volunteer for charity on company time.

“To me, the growth of the B Corp movement is a sign that there’s hope for business to be used as a force for good on a much larger scale,” says Frick. “And as awareness of B Corp increases, consumers will then start making more educated choices about the businesses they are willing to support. I think it’ll create a domino effect throughout business and society.”

Tags:
better because of us