The Joinery branches out with new downtown furniture showroom 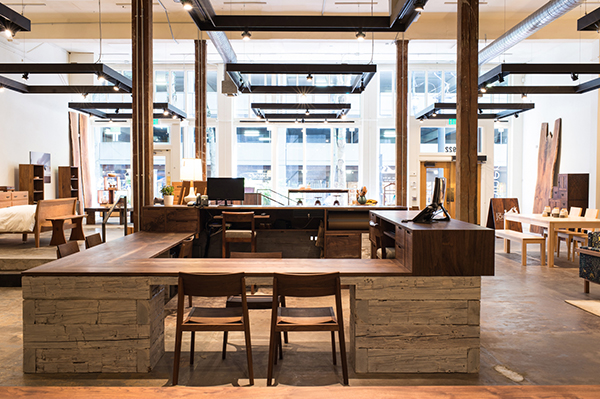 Hardwood furniture maker the Joinery has transformed its downtown Portland pop-up shop into a stunning permanent showroom. The company, which has produced heirloom-quality pieces in its Woodstock workshop for 33 years, occupies the building that formerly housed Finnegan's toys.

"We first opened it to test the waters, but there's nothing 'pop-up' about the space now," said owner Jon Blumenauer, who purchased the company in 2013 from founder Marc Gaudin. "We put an enormous amount of heart and planning into designing the space so that it would reflect what we do best, so that it would be a thoughtful representation of how we work."

The move is part of Blumenauer's plan to guide the Joinery from a secret into a higher-profile furniture company tied into Portland's design scene.

Best known for its Shaker and Mission styles, the Joinery also has more modern products, such as its midcentury-inspired Whitman line. As its name suggests, the company's designs feature traditional joint work including dovetail, mortise and tenon, finger and butterfly methods; no cheap dowels and adhesive here.

Each item is made by one craftsperson who puts his or her name on the final product. To showcase the beauty of the wood, pieces are "super-sanded" to a silky finish and then coated with a top-secret clear oil. True to its 1983 founding as a furniture repair business, the Joinery gives every customer a tutorial on how to maintain the wood and deal with mishaps like heat rings.

The Joinery's methods are increasingly rare in an era of mass-produced furniture, and its mid to high-end pricing reflects that. A low, six-drawer Whitman dresser costs $3,691 in Eastern walnut and a Madrone hope chest is $2,030. A Whitman chair, with an upholstered seat and clean midcentury lines, costs $1,084 in quartered white oak. All of the furniture is warrantied for life.

Every woodworker at the Joinery contributed to at least one permanent design element in the new, 4,700-square-foot showroom. Craftspeople displayed their talents on a custom whitewashed reclaimed fir and Western walnut reception desk, rift-sawn white oak kitchen, live-edge barn door and other pieces.

Blumenauer is quick to assert that the Joinery's emphasis on painstaking craftsmanship will not change as the company grows, and that he is still committed to using FSC and locally sourced woods in the "overwhelming majority" of products.

The company's annual Metamortise contest encourages designers to transform scrap wood into functional, stylish pieces. Even the sawdust in its workshop becomes heating briquettes that are donated to the community.

"The vision for the company is tied into larger communities, both local and global, and we take that commitment very seriously," he said.

B Social: Portland kicks off with a bang

The inaugural B Social: Portland kicked off last night at The Joinery’s downtown showroom at 922 SW Yamhill. It was a busy evening filled with fabulous drinks, tasty food and lots of networking!

Thank you to the following B Corp partners for making the event such a success: A to Z Wineworks, Bamboo Sushi, Hopworks Brewery and Starvation Alley. We made new friends, generated business ideas and forged partnerships! We are all looking forward to the next event.

The goal of B Local: Portland is to cultivate relationships, increase collaboration, and generate business referrals between B Corps in Oregon state for the benefit of one another and the larger B Community. Nothing brings a smile quicker than delicious aromas from the kitchen. A home cooked meal can’t be accomplished without the right tools. Every chef will tell you a good knife is nothing without a good board to use it on. Bread boards are a signature item at The Joinery and add functionality, warmth and a homey look to any kitchen.

Bread boards get more beautiful with time, especially if they are well made and cared for. The handcrafted durability of The Joinery bread boards will be valued for generations and often are displayed proudly like a work of art.

Check out the fine finish on our new home.

Last fall, The Joinery went out on a limb and, well, branched out: We opened a second showroom, in downtown Portland at 922 SW Yamhill. When we decided this year to enter into a long-term lease to make this our flagship showroom, we committed to making it a very thoughtful representation of who we are and how we work.

The space was a total team effort. Our in-house Design team worked with Firm 151 and R&H Construction to create the floor plan and design elements, then we turned our team of skilled craftspeople loose. Every woodworker at The Joinery had a hand in building at least one permanent design element. From the custom whitewashed reclaimed fir and western walnut reception desk to the custom rift sawn white oak kitchen – our craftsmen displayed their talents and proudly left their mark.

The materials used in many architectural elements include 1890’s axe-cut fir beams salvaged from a barn in Aurora, OR, locally harvested Western Walnut from Goby Walnut, and locally harvested, FSC-certified Pacific albus.

Thank you to all our partners for their creativity, their energy and their inspiration to help make this space our new home. We’re delighted to be settled into downtown, in a district that’s become a focal point for artists and craftspeople. We’re proud to be a part of it, and invite you to drop in (we’re right on the MAX and Streetcar lines) and see the inspirational environment we’ve created for The Joinery’s hardwood furniture family. Springtime at The Joinery: Everything’s coming up green awards

Since our founding in 1982, The Joinery has worked to be environmentally responsible and community minded. The impact of those efforts has been good enough to be recently named to the Oregon Business “100 Best Green Companies to Work for in Oregon.” Exactly where The Joinery falls among the 33 companies ranked in the Small Company category won’t be unveiled until May 27, but we are proud to have made the list.  In a state as environmentally progressive as Oregon, this award is particularly welcome.

Celilo Hall Tree: Craftsmanship we can hang our hat on.

The Joinery is celebrating the imminent arrival of spring with the debut of our Celilo Hall Tree, designed by our own Lys Opp-Beckman in consultation with shop foreman and resident master carver Tenzin Wangdu.

The Celilo Hall Tree lets you indulge your spring cleaning impulses by creating a welcoming and refined nest for your outdoor necessities. Its slender suspended coat rack with graceful cast hooks from Sweden hold jackets, hats, scarves, pet leashes, et al. There’s shelf storage for boots and shoes, plus a floating seat that lets you don and remove footwear with no one-footed gymnastics needed.

The prototype for this modern variation on a classic fixture was built by 10-year veteran of The Joinery, Justin Appel, who provided proof-of-concept of some advanced woodworking techniques. The Celilo’s bridle joint design, for example, is a joint-strengthening, exposed joinery technique that allows no room for error during construction. It’s just one of the thoughtful woodworking details that makes this piece of furniture at once minimalistic and deeply refined.

Consider the Celilo Hall Tree as a highly functional focal point for your hallway, entryway or living room. It will let you bring your springtime outerwear out of the closet and make both a fashion and furniture statement at the same time. Everything that we build is warranted for life, you know that it’s, well, built for the long hall. To see this piece for yourself visit our downtown showroom at 922 SW Yamhill St in Portland. The faceted feet are a unifying feature of all three families. Additional elements tie the pieces together: the Corbett’s seamless case body with mitered corners evokes the Sleigh’s large and elegant surface area, while the faceted drawer fronts add a linear quality that complements the vertical lines on the Lorelei’s headboard. These “hyper-controlled” hand-cut drawer fronts, are a true test of virtuosity and are assigned only to our most masterful woodworkers.

We’re excited to debut the Corbett line this month in nightstand and 4- and 6-drawer dresser renditions. All proudly demonstrate how design, technique and hand-selected woods can work together to create a catch-your-breath effect. They are a great reason to drop by our Woodstock showroom and renew your spirits with some inspiring craftsmanship. 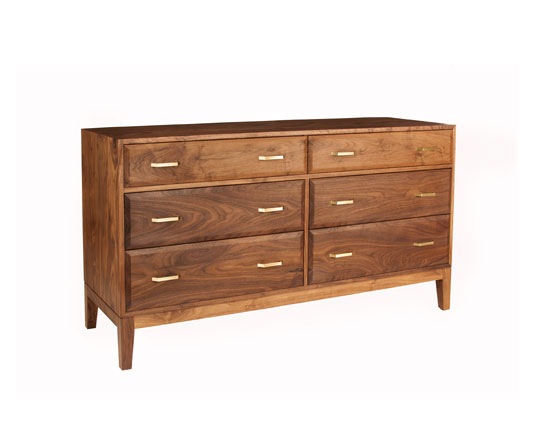 Take Stock of our Christmas Stocking

You say you’ve procrastinated with perusing our catalog and pre-ordering a piece in time to be built to order for Christmas? Well, chances are there’s a miracle on Woodstock (or Yamhill Street) just waiting to save the day. We’ve stocked up at both our stores with many of our most desired items, so you still have plenty of ways you can furnish your family with a gift of consummate craft, beauty and durability.

Among the many pieces you can take possession of right off the floor is our charming Leon Rocker – an accent piece and a prescription for stress-relief for people of all ages. We also have available several variations of our popular Butterfly Bench, with its distinctive bowtie-like butterfly joints in contrasting wood species, and our Shaker-inspired Hope Chest – as much a prized possession as whatever goes inside it.

Drop into our Southeast or downtown Portland showroom and come away with a piece your loved one will love. The less you procrastinate, the larger the selection! You may come to The Joinery looking for something big, but it’s hard to avoid leaving without one of our small handcrafted ornaments, curios or other practical or whimsical holiday accessories. Every year we help make the season bright by selecting a few distinctive, Joinery-quality ornaments, toys and wooden whatnots for your own seasonal display and your gift list.

Among the items we feature this year are wooden ornaments that a John Doering makes from The Joinery’s own scrap lumber. We also have some delightful little felt ornaments that look like cuddly woodland critters, wooden animal cutouts, and the ever so popular wooden snowflakes.

Whether you come in with a dresser, a table or an entertainment center in mind, you’re likely to leave with a bauble you love.  Drop in soon and give in to the temptation! A Dozen Ways to Amaze

Even if you celebrate 12 days of Christmas, The Joinery has you covered with accessory picture frames, lighting, tiles, mirrors, coat racks, mattresses, countertops, jewelry boxes, serving bowls, baskets, wooden toys, games and a multitude of kitchen items. Chances are, we’ve got something unusual, beautiful and handcrafted for every price range and every person on your shopping list.

Some of our more popular accessory items this time of year are the Plywerk Maggie and Stanley pictures frames, handcrafted locally in Portland and the Charley Harper Tiles by Motawi Tileworks in Ann Arbor Michigan.

We are proud to be an outlet for local and national artisans whose mastery of their craft and standards of quality are as unstinting as our own. If you want to give gifts that are labors of love, not of an assembly line, come in and ogle the merchandise.

Pictured below are just a few of our favorites. 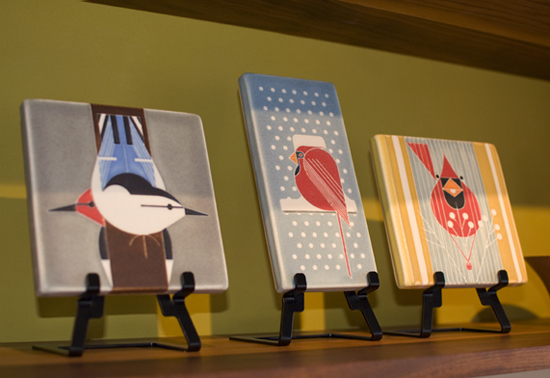