Stop by our showroom on a weekend and chances are you’ll see children – and often enough, adults – absorbed in a game of chess or Scrabble on a game board that is just too gorgeous to ignore. Take one of these handcrafted pieces home and suddenly those well-worn classic games are new again. The boards you see here are just a few of the types and styles available. 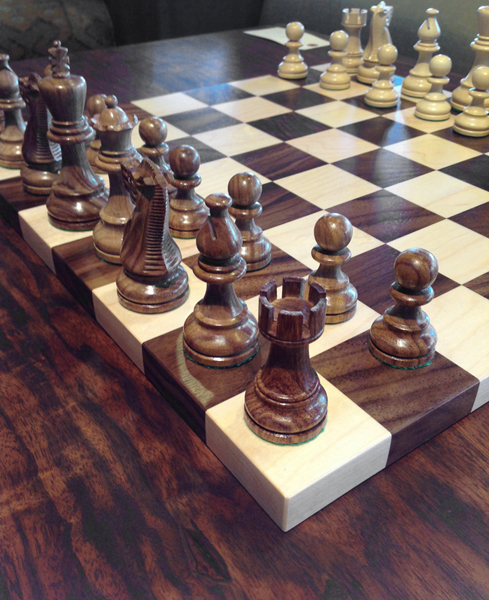 Chess Board and Pieces made from Walnut and Maple • $185

Every year, we challenge our master builders to turn leftover wood fragments into something wonderfully unique. Their designs range from wildly imaginative to inventively utilitarian. But they all must meet The Joinery’s pedigree of beauty and quality.

To qualify to win the piece of your choice (up to a $4000 value), all you have to do is vote by clicking here.

To qualify to win, complete the ballot by answering all questions. Voting is open until June 1st. Shipping not included. All entries are displayed in our showroom and available for purchase. But they don’t last long.

Below are all the entries to this year's contest. The piece with the most votes will the Metamortise Award. 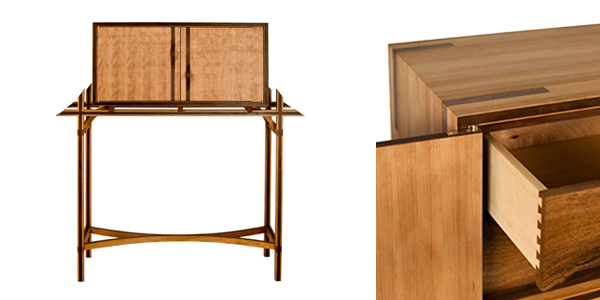 Best for the Evironment 2014

In April The Joinery was named to the “B Corp Best for the Environment” list in recognition of our outstanding environmental practices.  Our inclusion resulted from an environmental impact score in the top 10% of all Certified B Corporations on the B Impact Assessment, a rigorous and comprehensive assessment of a company's impact on its workers, community, and the environment. This is the second consecutive year that The Joinery earned this distinction. See our score and learn more about the other honorees here. 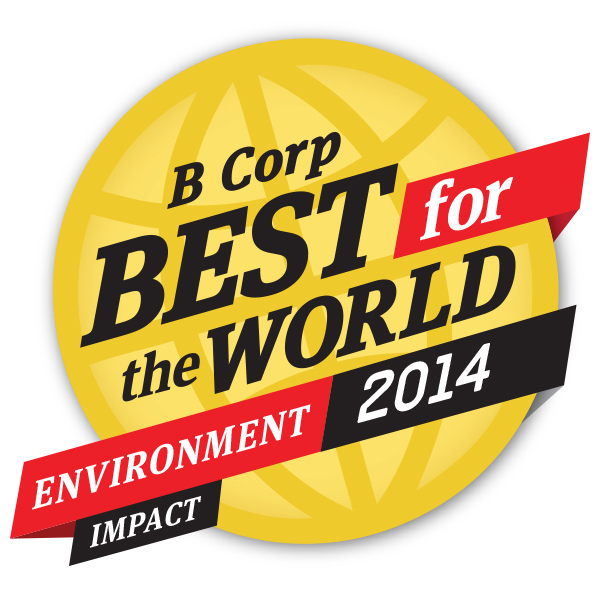 Read more
Tags:
better because of us

The Scrap Contest is Coming

Our 4th annual Scrap Contest is now underway. We challenged our entire team – including design, sales and craftspeople – to develop innovative new products utilizing only scrap wood. After much lumber hoarding and lots of time building and sanding, the pieces are nearly complete. Voting opens on May 13th and can be conducted online or through an in-store survey.  At the conclusion of the contest we will draw the name of one voter, whose prize will be their choice among any of the Scrap Contest entries.

Below are photos of a few of the pieces being entered this year. 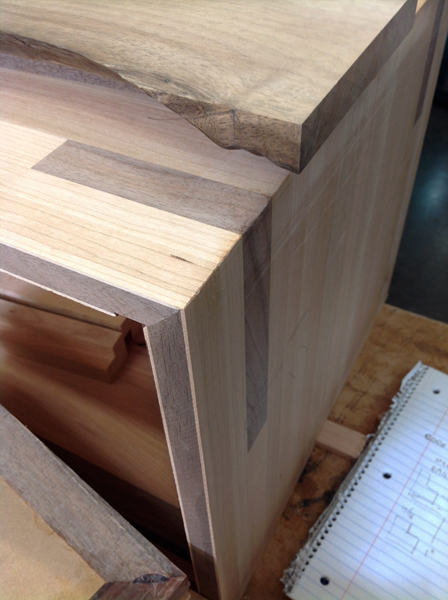 Read more
Tags:
wood shopbetter because of us

We have some great new gift ideas that are perfect for Mother's Day, including game boards, ceramics, glass, and wood accessories.  Many are unique pieces handcrafted by local artisans, who we are proud to support.  Stop by our showroom to find the perfect gift for your Mother or other special someone. 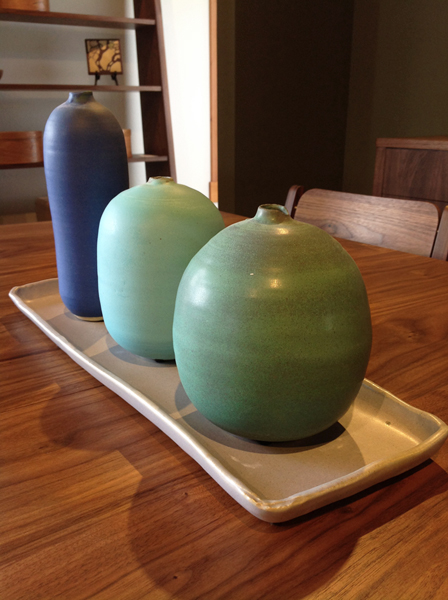 Gathering of the Guilds show and OPA showcase

This year's Gathering of the Guilds and Oregon Potter's Association Annual Showcase is coming up. Held at the Oregon Convention Center, both shows are open May 2nd and 3rd from 10 am to 9 pm and May 4th from 10 am to 5 pm. This event features over 200 local potters from Oregon and Washington, along with many of other members of the Guild of Oregon Woodworkers, Oregon Glass Guild, the Creative Metal Arts Guild, the Portland Bead Society and the Portland Handweavers Guild.
The Joinery will have a booth at Guild of Oregon Woodworkers area. There will be educational demonstrations throughout all Guilds along with music, fashion show and much more. Below are just a few of the exhibitors from the Gathering of the Guilds. 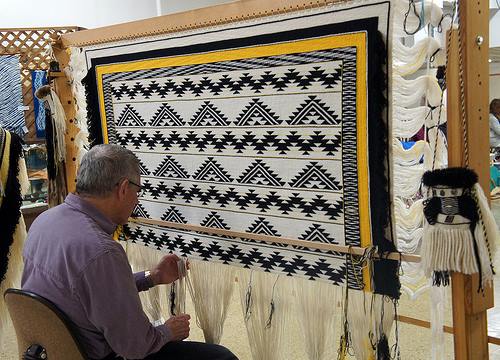 Briquettes Made from our Woodshop

Briquettes are now available this season! In keeping with our green initiative, the Joinery converts all of its sawdust and wood chips to briquettes.  As a service to the community we offer these briquettes to the community for free on a first come, first served basis.  They are great for barbecuing or for heating during the cold winter months. 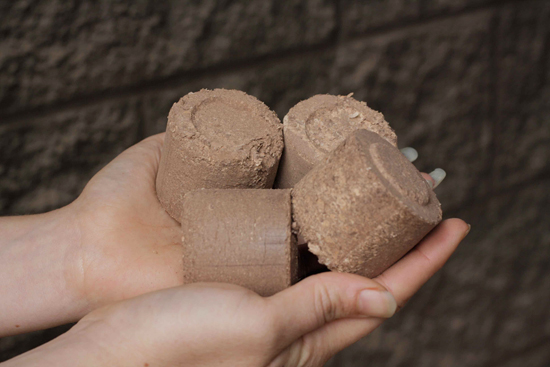 A few of our wood briquettes ready to use

On October 12, 1962 one of the most powerful storms of the 20th century rocked the West Coast.  The famous Columbus Day Storm was felt from Canada to California.  Waves crested at 30 feet on the Oregon Coast.  Winds as high as 179 miles per hour ripped roofs off buildings and uprooted trees throughout the Pacific Northwest.  One Western Walnut tree in the front yard of a home in tiny Keizer, Oregon survived the storm, but with a serious battle scar:  A lightning strike on its trunk.

The house where the tree grew passed from one owner to the next, but the tree – and its story – remained.  The lightning bolt seared the side of the tree, but over time the tree regenerated around the burned area.  When the house’s current owners decided to take the tree down, they hoped it could live on in another form.  So they contacted us at The Joinery and we jumped at the chance to purchase this piece of history.

Over the last year, the Lightning Tree has been turned into a custom bed, a desk, a dining table and a set of nightstands.  With our focus on design and quality, we believe these pieces could very well live longer than the tree itself.

Now, down to the last slab remaining from the Lightning Tree, we’ve produced this beautiful live edge dining table, highlighting the rich, dark grain that makes Western Walnut so highly prized.  The area where lightning struck over 50 years ago is still visible on one edge of the table.

While the Columbus Day Storm wreaked havoc on the region, the Lightning Tree survived.  Now it begins its next life as the Lightning Table, which will last long into the future. 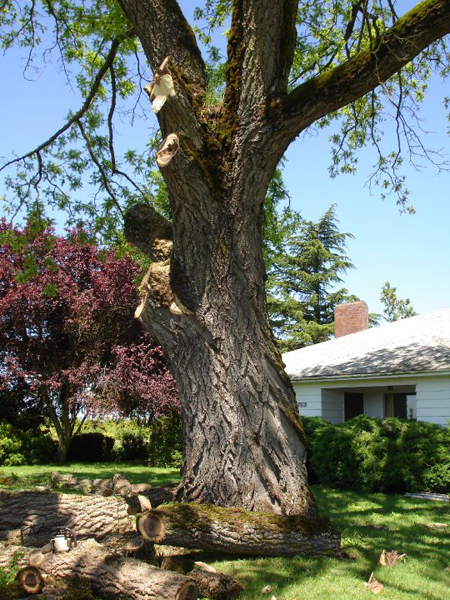 The Lightning Tree as it was being taken down in Keizer, Oregon.

Our latest shipment of handcrafted toys from Noli Noli has arrived and they are really darling.  The one that caught all of our attention was the Day Owl which comes apart so you can store little treasures inside its body. To learn more about Noli Noli visit their website here or to purchase the Day Owl click here.

New to our showroom floor is a custom Maple Dining Table. This solid top dining table pairs really nicely with the Maple Studio Chairs, and the Custom Studio Bench we have available. The table is 42"D x 84"L x 30"H x and is $3,950. To learn more about this dining set or about other custom options contact us here. 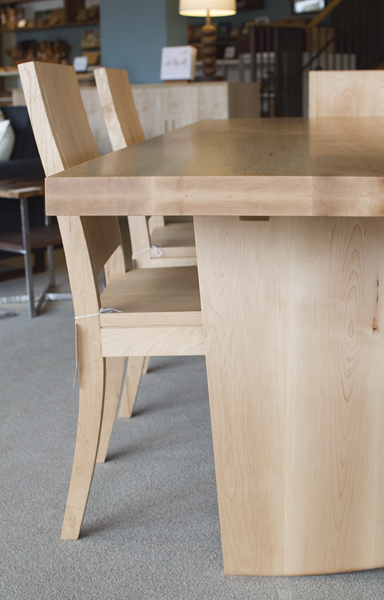